ABB microgrid and wireless technology enables a South African World Heritage Site to run on sustainable, stable solar power – and serve as a global model for the clean-energy future.

Robben Island, South Africa, has a geography so daunting that for centuries it housed a notorious sun-baked, windswept prison. It is the place where Nelson Mandela spent 18 years during his arduous but ultimately successful struggle to end apartheid. The island, where that prison now serves as a living museum, has just become an exemplar of the clean-energy future.

To power Robben Island, a UNESCO World Heritage Site that receives up to 2,000 ferry-riding visitors a day and is home to more than 100 tour guides and staff who operate the museum, South Africa’s Department of Tourism has just installed a new solar-powered microgrid built with advanced technologies from ABB.

Essentially a small-scale electric grid, the microgrid will enable Robben Island to drastically reduce use of the fuel-guzzling, carbon-polluting diesel generators that previously were the island’s only source of power. ABB, which has installed more than three-dozen microgrids in various settings, sees the technology as adaptable to islands elsewhere around the world – or anywhere that a remote or geographically discrete population shares the need for clean, sustainable, stable energy separate from a big public-utility grid.

Residents see it as yet another way that Robben Island can help inspire the world through vision and example. “Robben Island should always be a beacon of hope for everyone,” said Vusumzi Mcongo, who was arrested at age 24 and held as a political prisoner on the island for years. Now, at age 63, he is one of the tour guides. “I am positive that the future looks brighter.”

The microgrid depends on extensive digital capabilities to achieve optimal efficiency. An ABB AbilityTM remote monitoring capability enables the system to be monitored and operated from Cape Town, 9 kilometers away across waters with treacherous currents. The remote set-up also eliminates the need to maintain a workforce on the island, whose volatile weather can sometimes impede travel to and from the mainland.

Robben Island, which also has a working harbor and lighthouse, has the overall energy requirements of a small village – equivalent to the needs of about 130 households. Before the microgrid was powered up, the island’s sole reliance on diesel generators required burning around 600,000 liters of fuel annually, at great cost and creating considerable pollution. By enabling the island to run on solar power for at least nine months of the year, and using diesel only as a backup, the microgrid is expected to lower fuel costs and carbon emissions by 75 percent.

“Microgrids are a key element of the grids of the future," said Claudio Facchin, President of ABB’s Power Grids division. “What we are implementing as a technology at Robben Island is definitely one of the benchmarks of how we can support to enable stronger, smarter and greener grids.

The Robben Island microgrid captures solar power from an array of photovoltaic panels on the southeast side of the island that cover an area the size of a football field and have a peak capacity of 667 kilowatts. 12 solar inverters convert the variable direct current (DC) output from the solar panels into the alternating current (AC) needed to provide electrical power to the island. The microgrid can run on solar power through the day, bolstered by a battery bank that can provide power for approximately seven hours after the sun goes down.

The project is part of a sustainable tourism initiative funded by the Department of Tourism and was executed for SOLA Future Energy, an engineering, procurement and contracting company.

An additional benefit of the wireless network is that it there was no need for cable trenches, helping protect the local habitat. Robben Island is included in the South African natural heritage program and is home to more than 20,000 African penguins, herds of springbok, South Africa’s national mascot, as well as a bird sanctuary.

“I have a passion for this place,” said Mr. Mcongo, the tour guide, who values preservation of both the natural and the historical significance of Robben Island. “I can learn from the past, because the past has made me what I am today. 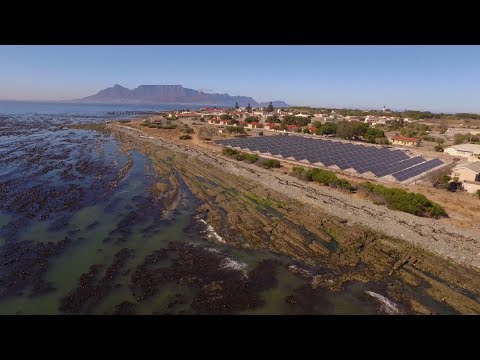